"A sun, a light, which for lack of a better I can only call yellow, pale sulphur yellow, pale lemon gold. How beautiful is the yellow! And how much better I shall see the north."

Dedicated to the sun and light, Yellow mantra lights up in the yellows of the "code" and, with its shadow, the reading repeats like an endless mantra.

Anna Pennati first included her "Code" in one of her works in 2010.

Formed by 4 elements that are repeated to form a "writing" that, however, is not an alphabet, but requires a decoding of a sensory nature.

The code is the link between visible reality and sensible reality. It is the voice of the work of art. 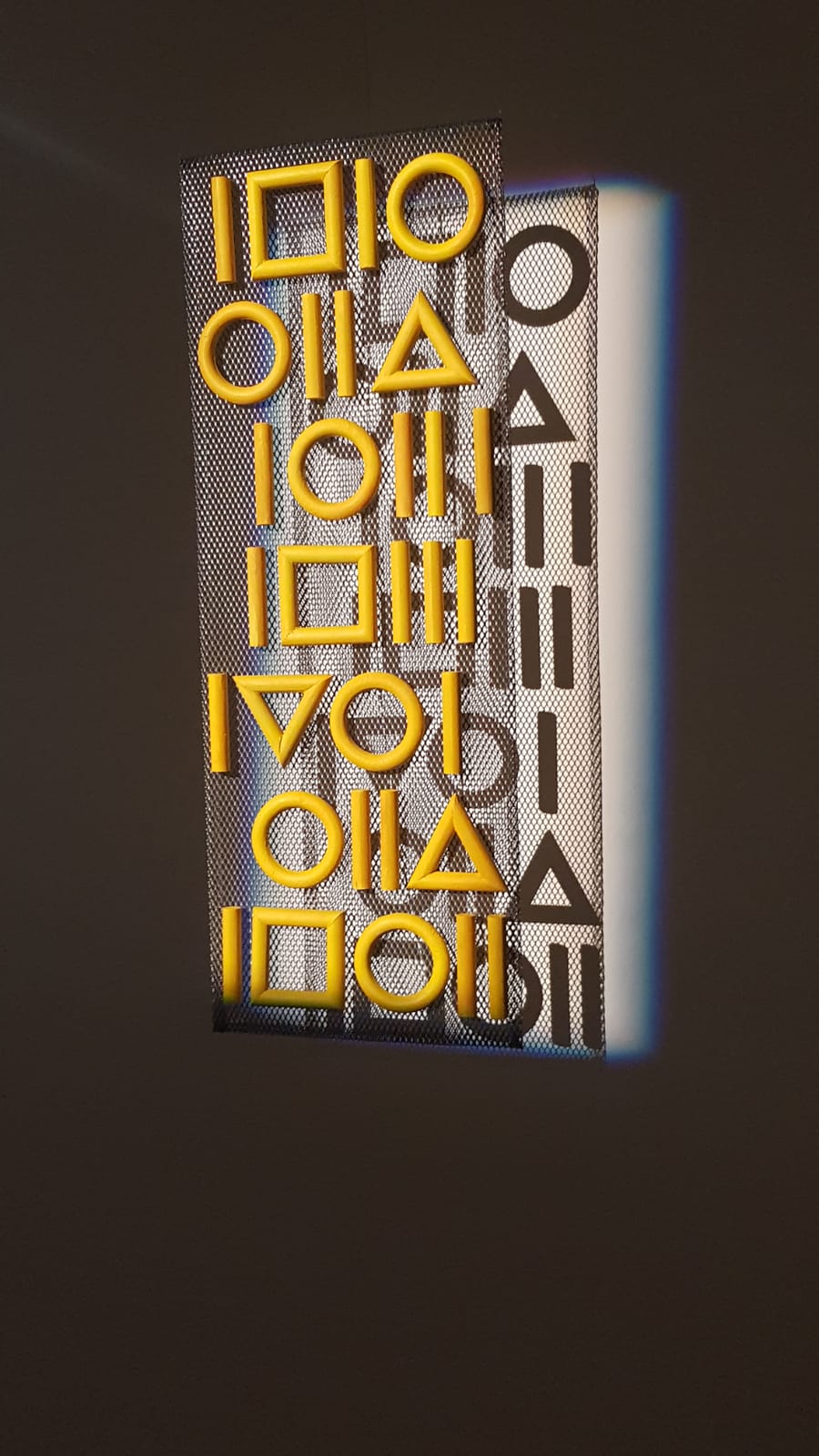 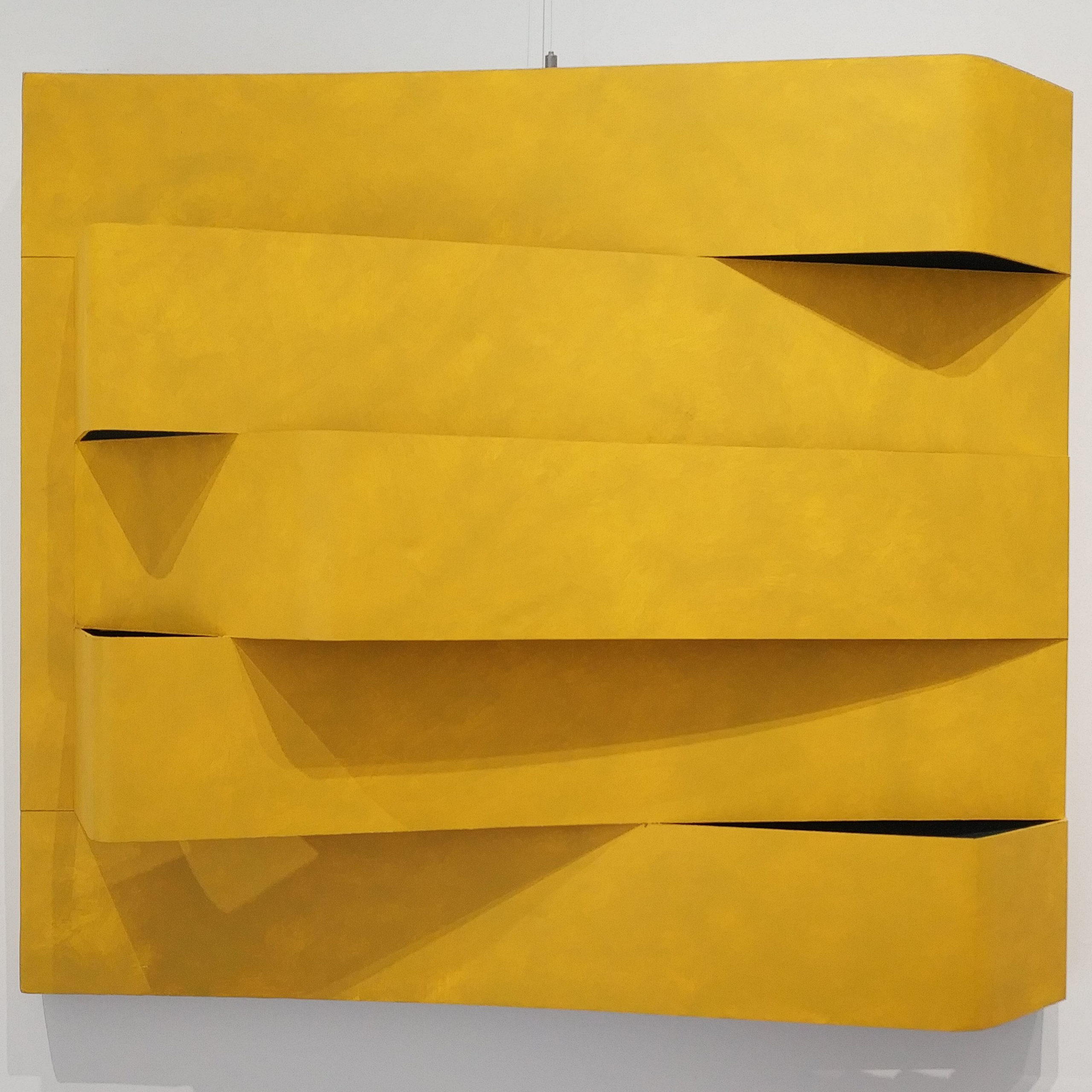 Seen in the front, we can perceive the linear boundaries moving across the area, almost like the elevations of a territory or the waves of the sea.

On the other hand, from the side he produces a sensation of being able to cross these "borders" through the openings that Lucio Perna wisely lets us see and that lead us to observe even what goes beyond appearance.

Important work by Agostino Ferrari where the sign becomes the free protagonist of the entire scene, "consolidated" by the sand of the beaches of Otranto that covers the surface.

The whole leads to a poetic reading that, in a continuous visual search for a beginning and an end, binds us irresistibly and indefinitely. 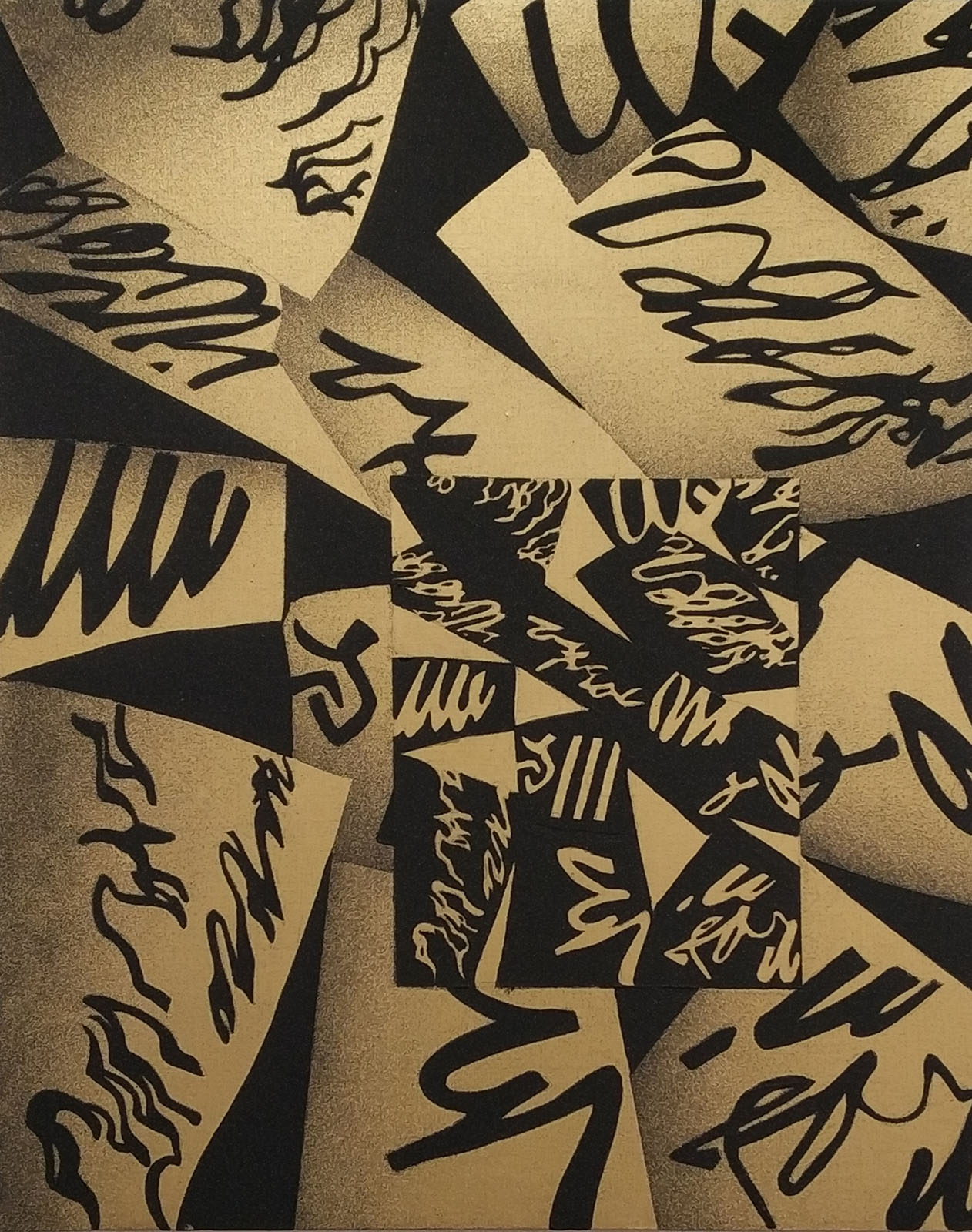 Elia Panori's yellow is that of the scalpitante and fresh intellect of youth.

Mature and deep is instead the resulting work in this video rich in symbolism and psychology.

From the series dedicated to Timeless Women by Salvador Aulestia, this is definitely a museum-level work, exceptionally granted to celebrate yellow, a color well present in the Catalan flag and in the colors of that Spanish land to which Salvador Aulestia, despite having adopted Italy as his homeland, was very devoted.

The subject expresses all the power of the work of one of the masters of international art of the twentieth century. 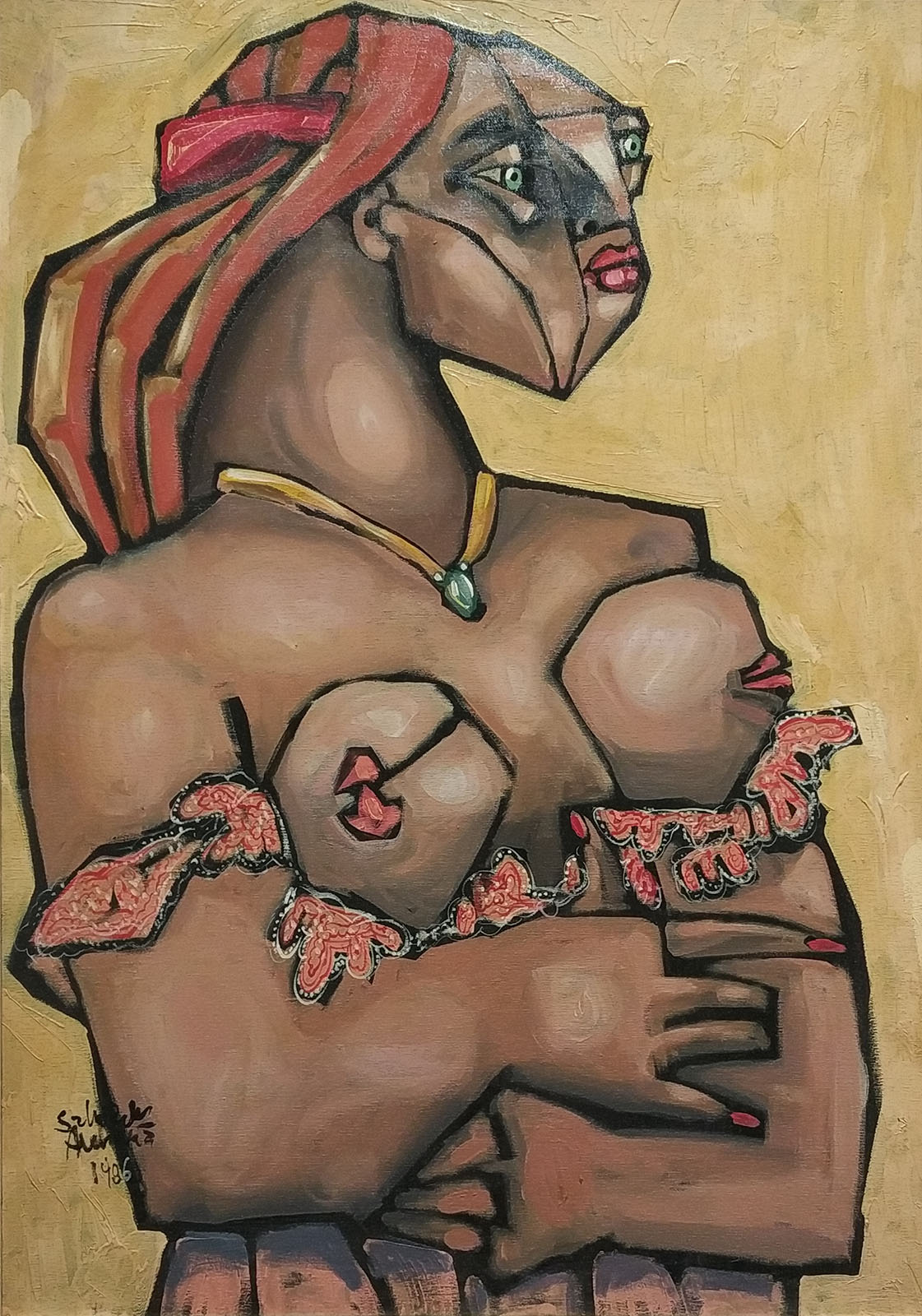 This work by Sonia Scaccabarozzi can be defined as "in movement", but the subject that moves is the viewer who, moving from one side to the other, perceives the tonal variations ranging from yellow, through green and gray, to deep black, feeling the sensation of being in front of multiple images.

570 nanometers is the wavelength of the color yellow, synonymous with light, intellect, faith and goodness, connected to the note MI, to the god Apollo of the Greeks, to the sun and gold, as its highest expression.

Yellow is re-energizing and a pathway to full involvement in life. 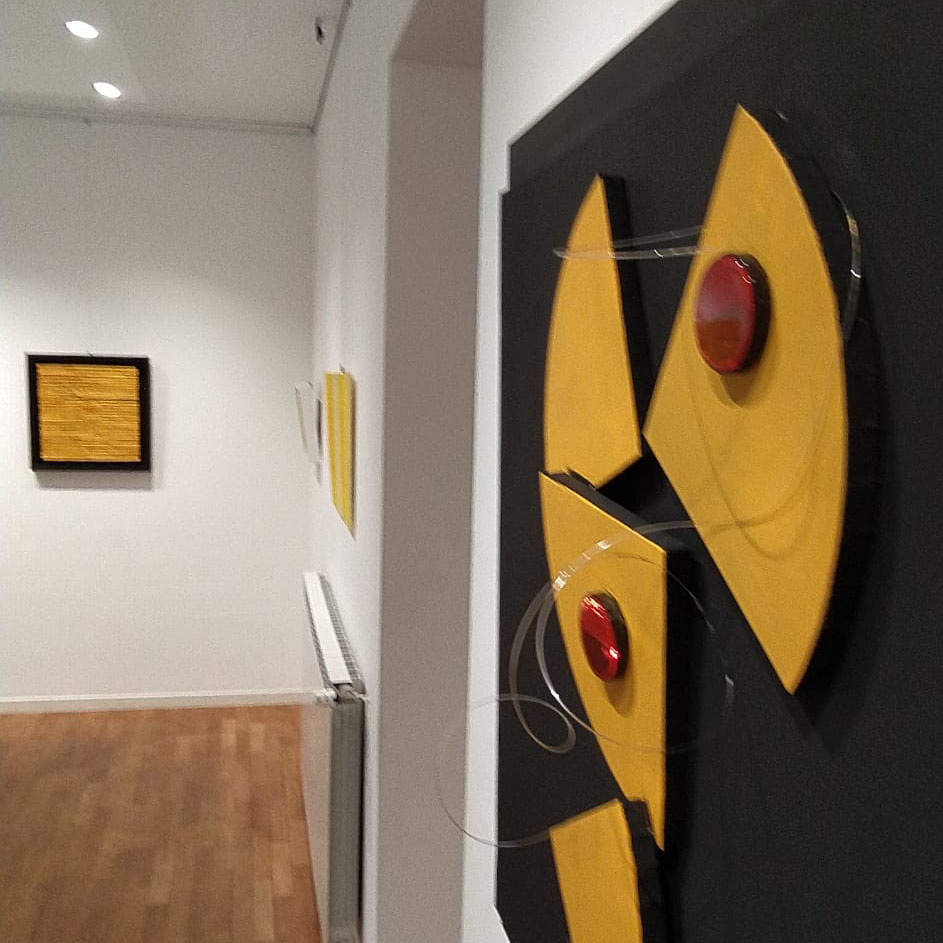 570 nm is the vibration that is perceived when observing the artworks of the 13 artists in the exhibition, heterogeneous as regards their artistic path, but united in this case, sometimes in a surprising way, by the sensations that are perceived as a whole.

Ariel Soulè, in this latest work from 2022 dedicated to the yellow, brings big news to his pictorial imagination.

The lines, which in previous works were almost a cage dividing the surface into sectors, here become a means of union, a link between "animic" figures which, perhaps thanks to the yellow color, are freed floating in the air, ideally signifying the exit from an imprisonment that well sums up the recent period. 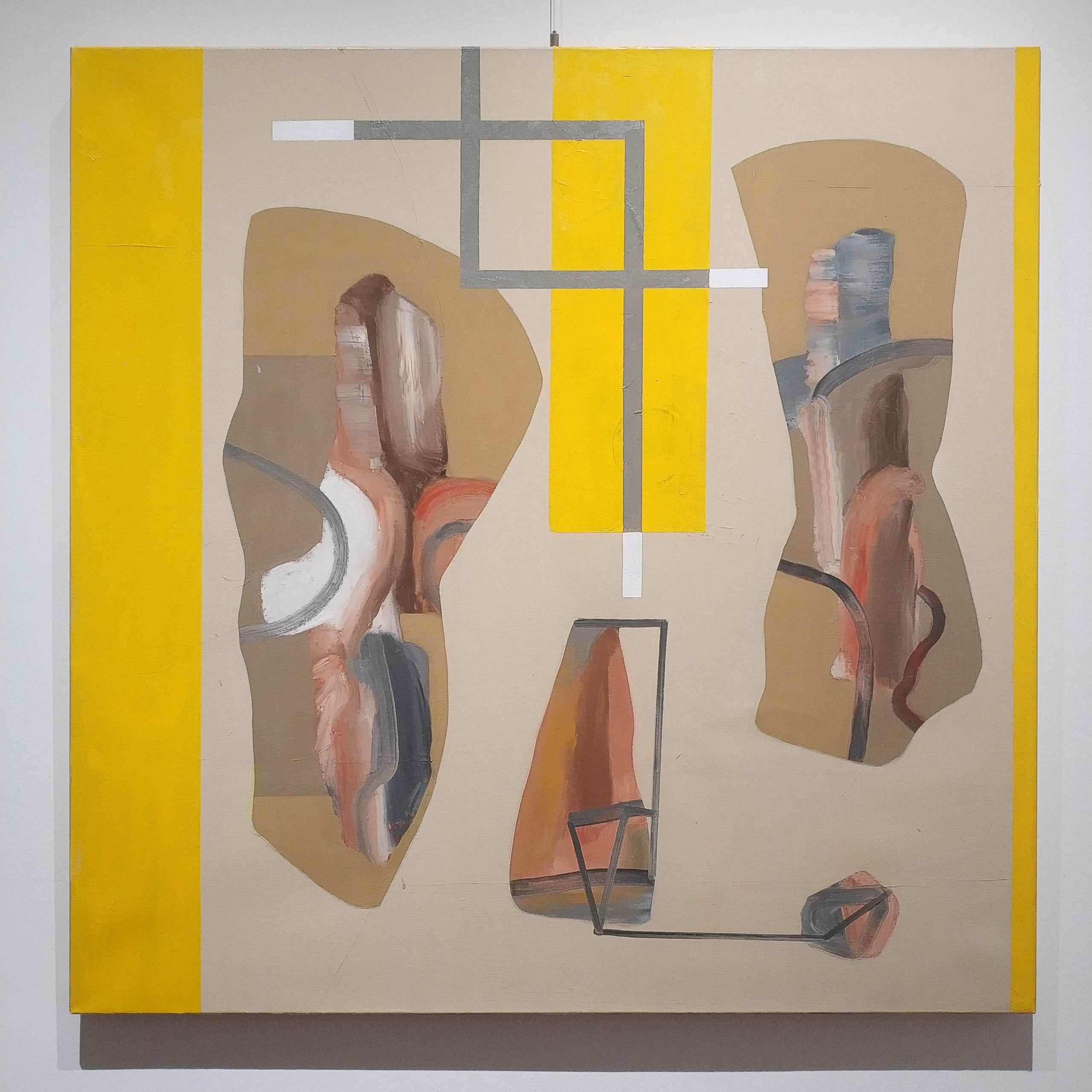 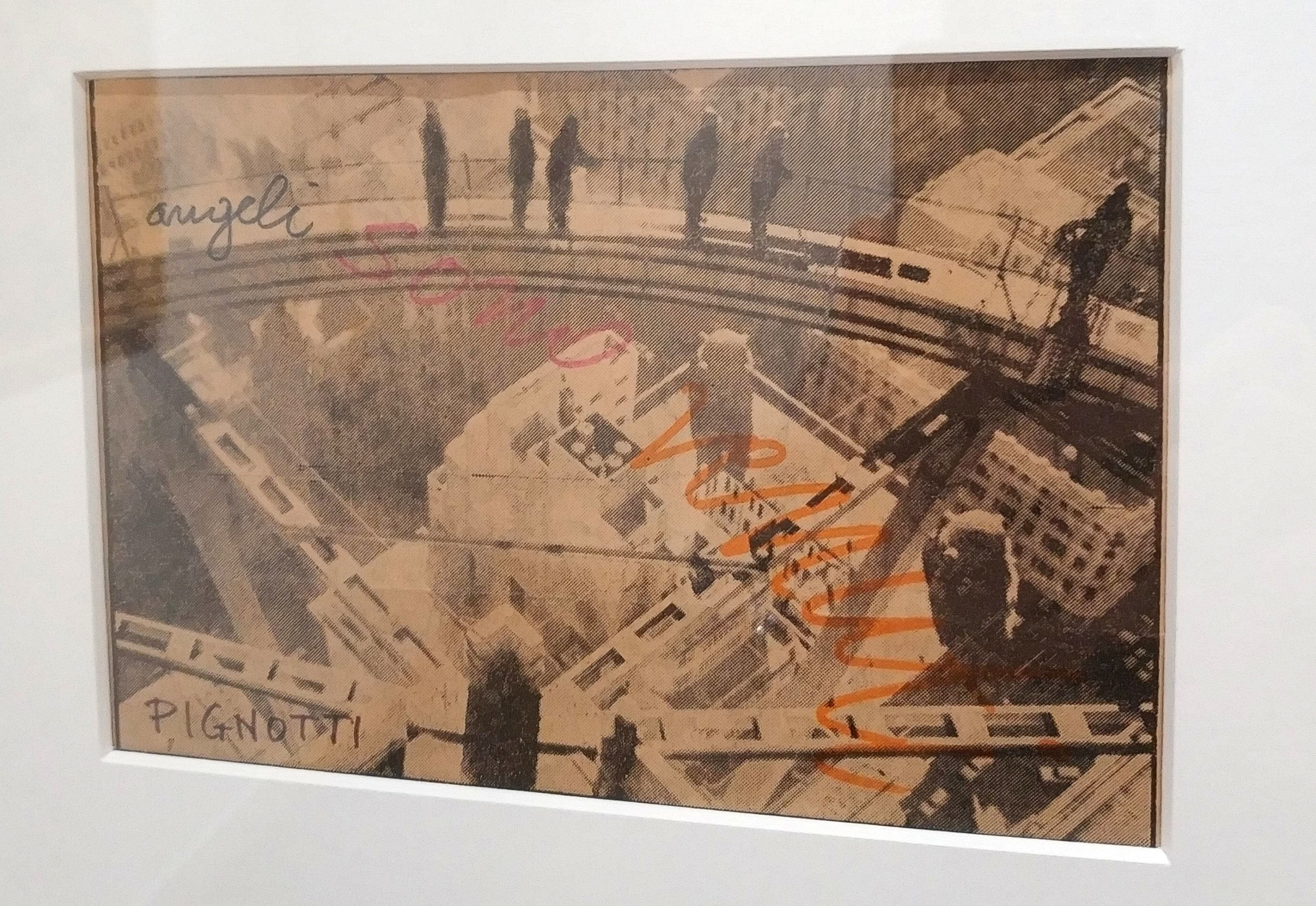 What else can be said besides what the image already communicates to us...?

...Lamberto Pignotti is one of the fathers of "visual poetry", an artistic current that has in the research of the visual meaning of the word, in relation to the image, one of its foundations.

What better way to express this work than the last poem that Anna Spagna wrote.

Ut pictura poesis has always been our motto. 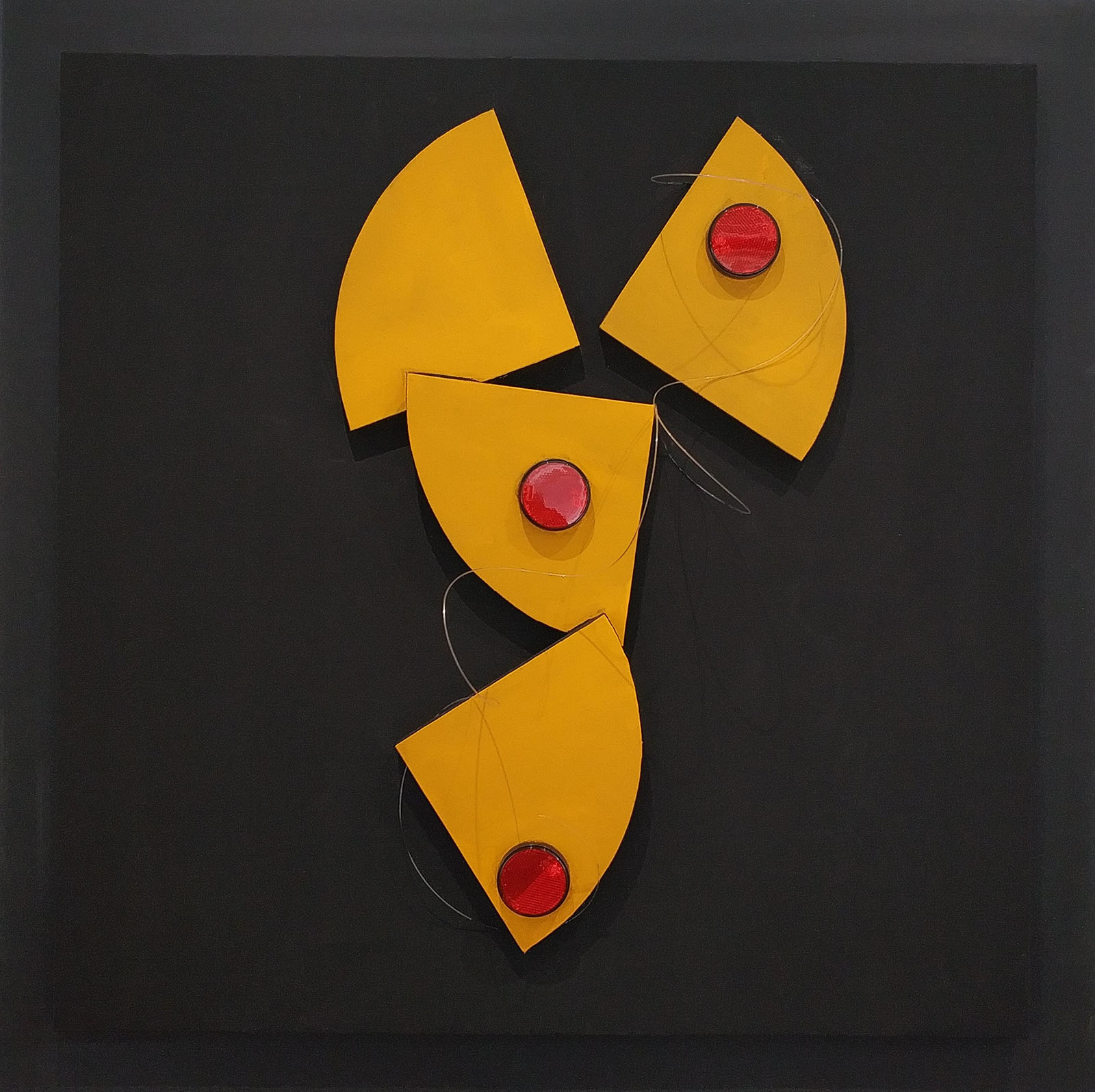 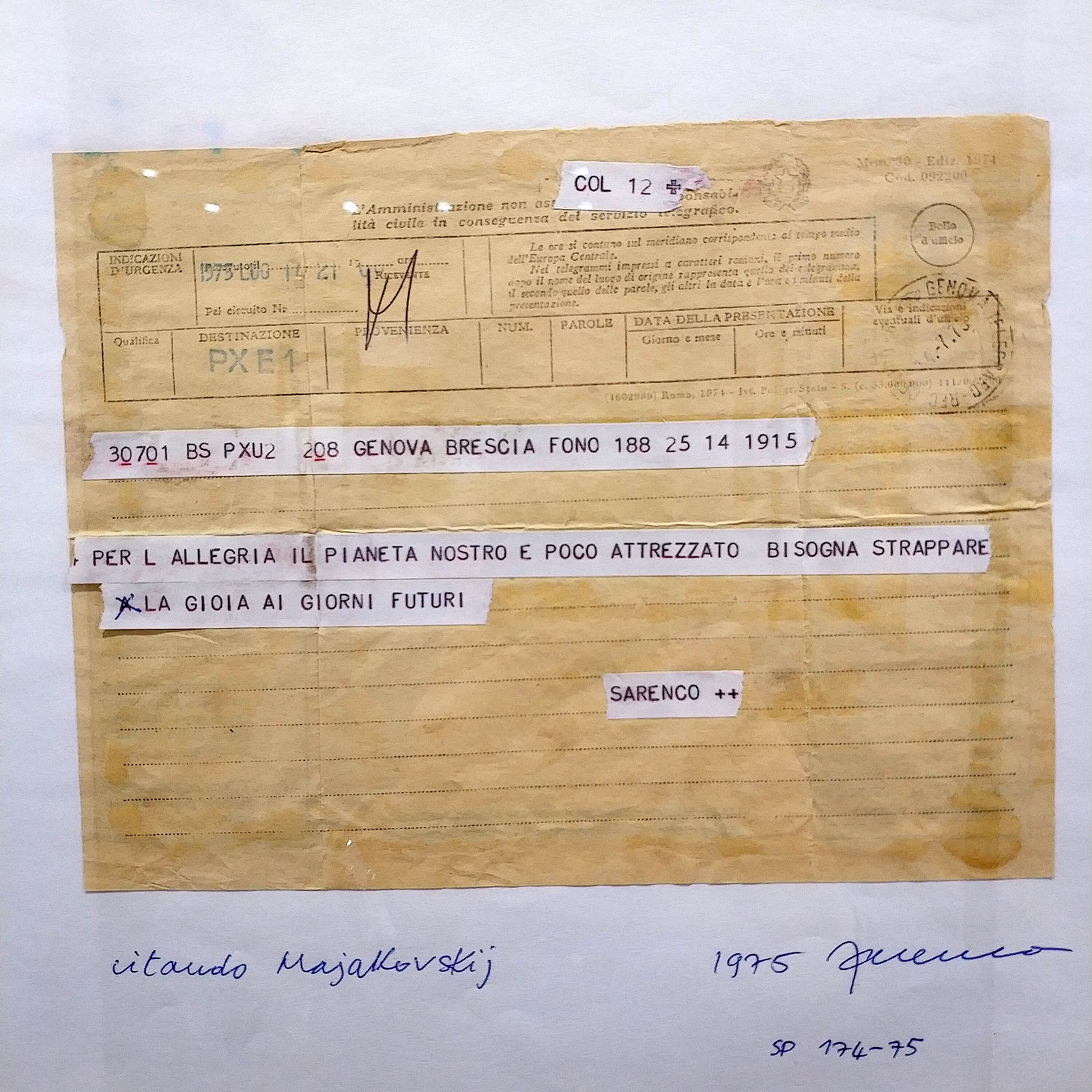 Sarenco's path is a continuous avant-garde, and in the text of this "telegram" he sums up all his unshakable optimism and determination to develop art by all means, from the graphic sign of writing to video and sound creation.

The transfer of a text through space, from paper, to air, to paper, and then from mind to mind, in a very short time, was a true revolution.

For Nagatani, yellow rises in a golden bronze to pure gold suspended in its spatial lightness between the vibrations of the arch that supports it.

For medieval alchemists, yellowing was a stage in the process of making gold, or getting to psychological fullness. It is a transitional phase, the becoming after chaos (black) and the hope of the beginning (white).

And as if by magic, but with a lot of work, the sculpture becomes significant form from liquid metal. 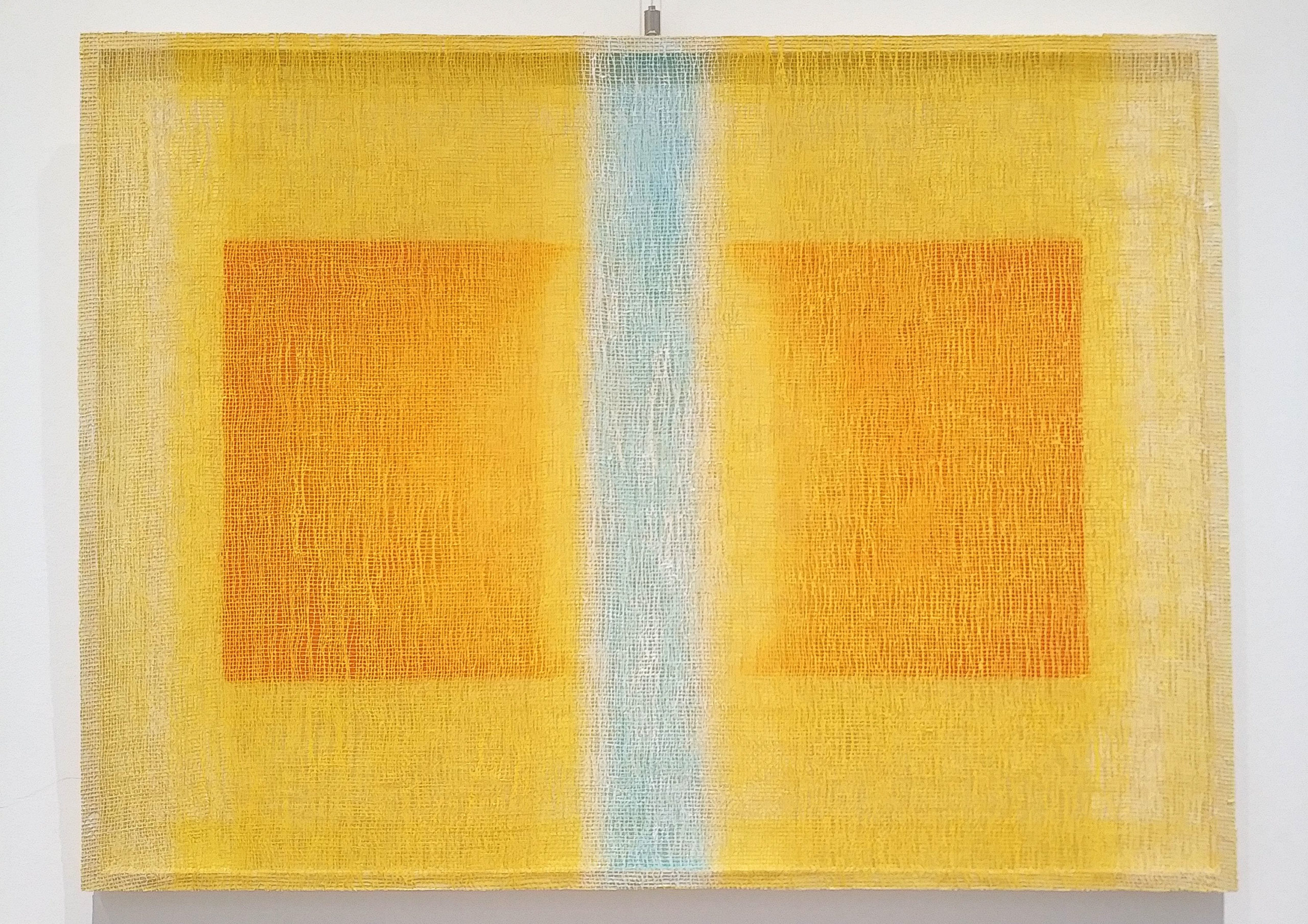 A yellow sky and a golden sun, crossed by a ray of blue sky.

Linda Pellegrini reminds us that important are the subjects and not what contains them, even if without the latter, we could not perceive the first ones.

A synthesis of the whole.

A living and enlivening path, where art, concept, symbol and structure are unified by the common denominator, the color yellow that with its positive analogies, wants to inspire a particular sense of well-being for the future. 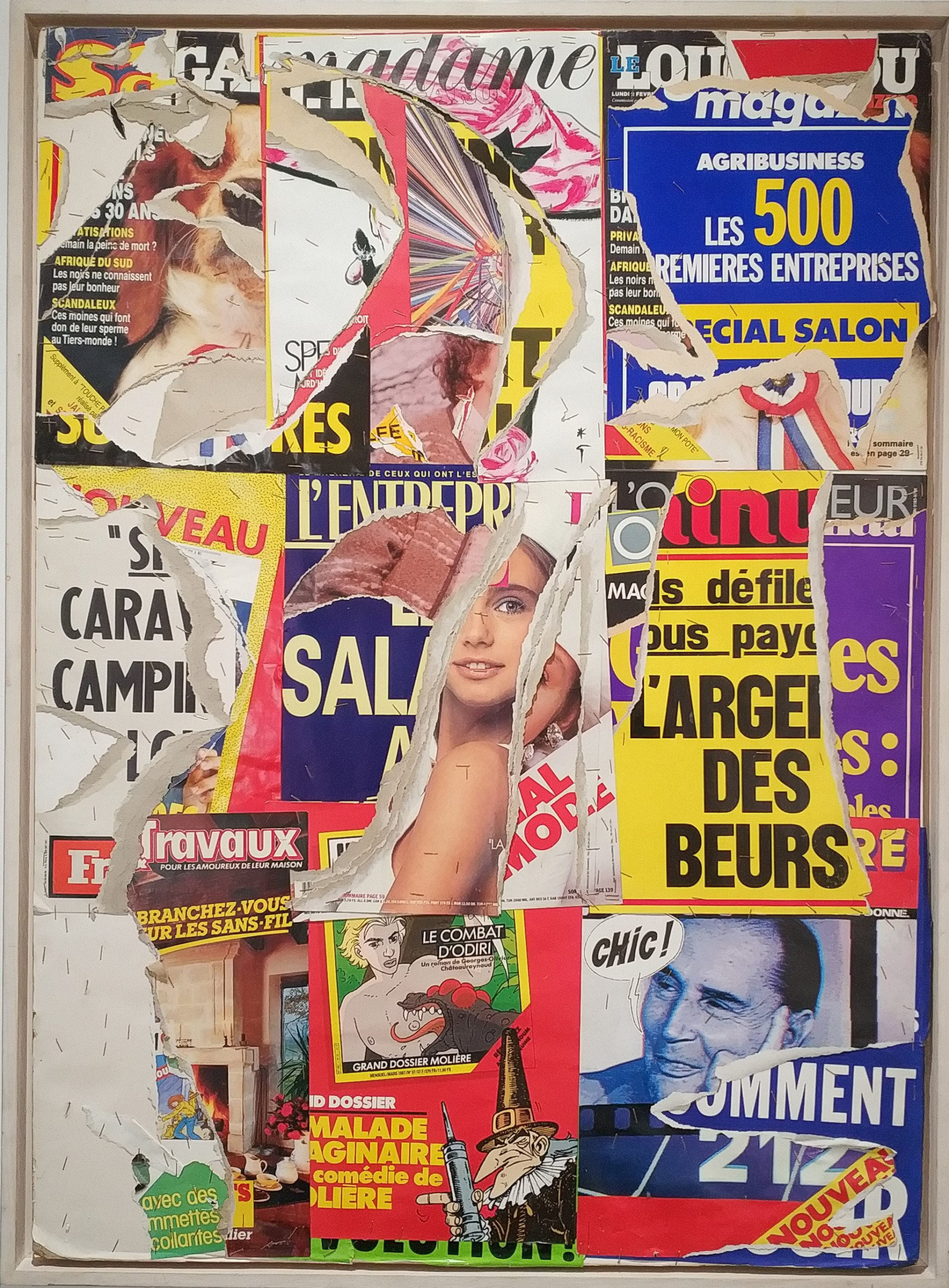