Almach Art Gallery, a new space dedicated to art in the cultural scene of the city of Milan, presents "Città surrogate", a solo exhibition by Lucio Perna.

There will be 15 works on display, works on canvas and some glass sculptures, representing the rich path of an artist who places research and social attention as the "fil rouge" of his activity.

These works can be defined as "musical" in that the particular three-dimensionality that Lucio Perna uses on his canvases creates a physical movement of the air around the shapes, which then "play" the images and colours that the eye perceives to the more sensitive viewers.

From a functional point of view, we could define it as multi-sensorial art, but Lucio Perna goes further, he is not satisfied and uses his works to convey messages that arise from his own social and human contemporaneity, in which the artist always participates with passion and tension.

Lucio Perna says: "Surrogated cities does not refer to the conformation of the city in the sense of 'Urbs', as a territory, but in the sense of 'civitas', a social aggregate that undergoes continuous changes as a result of external influences of a cultural, ethnic, religious, etc. nature. There is a desire and an aspiration with a sociological flavour underlying my artistic work.

Surrogate cities also bring with them the concept of 'borders', which are meant to represent the limits that each person carries within him or herself due to culture, training, social background, education, and against which one sometimes finds oneself struggling in the desire or hope of getting rid of them forever.

These are the anxieties, prejudices, insecurities, frustrations and fears towards those who are 'different' in terms of race, political orientation, religion, sexuality, etc...

An ideal society needs, at the very least, to explore the reasons for its limitations, to assess them in their proper scope, to grasp and understand changes in the social fabric, to develop a critical judgement whether affirmative or negative.

The artist's task is simply to point out the problem, of course, not to solve it. The function is fulfilled even if only one of his observers is sensitised and stimulated to reflect on the theme that the work proposes. 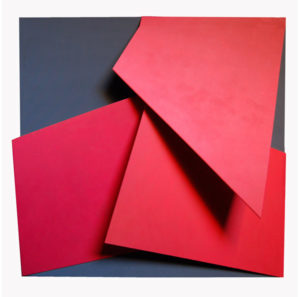 Lucio Perna arrived in Milan at the end of the 1970s, came into contact with the Milanese art world and attended courses on colour technique.

He had fruitful encounters with Remo Brindisi, with Ernesto Treccani and Aligi Sassu and with talented young people such as Enrico Muscetra.

In March 1998 he founded the movement "SYMBOLICUM" with Federico Honegger, Fabio Masimo Ulivieri and the poet and art critic PEDRO FIORI, the group's theorist.

The movement's manifesto was officially presented at the exhibition on 20 October of the same year at the Milan gallery Antonio Battaglia Arte Contemporanea and at the 5th edition of 'ARTEFIERA MILANO'.

In over twenty years of activity, Perna's painting has developed in the search for a language that, starting from an emblematic figurality (the cycle of "Sirens" 1972-80 and that of "Masks" 1980-88), arrives at the current symbolic research (I Miraggi) begun at the end of the 1980s.

His works reveal a liberating gesture that tears and creates. From time to time he moves like a geologist or a topographer, declining emotions on the surfaces through tonal adjustments and modulated shifts in perspective.

The conception of space, while not renouncing a certain tension of perspective, more the sense of illusion, of mirage as a simulation of visibility.